Now I want to introduce traditional Chinese dessert Tangyuan. It is made from glutinous rice flour mixed with a small amount of water to form balls and after that  they are cooked and served in boiling water. These balls can be filled with various ingredients such as: red bean and chocolate paste, fruit preserves, sesame seeds and ground peanuts mixed with sugar. 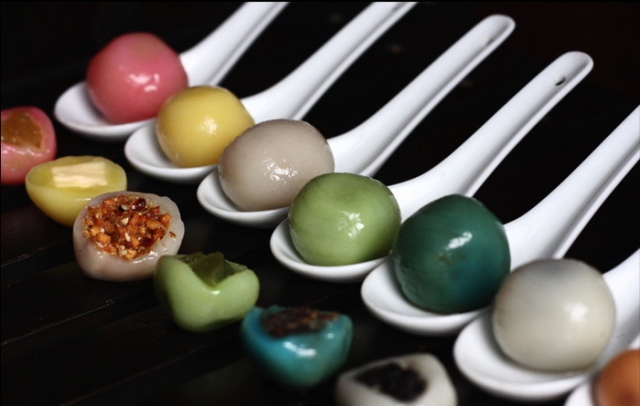 According to some facts in history, Tangyuan has been a popular snack in China since Sung dynasty. They are traditionally eaten during Yuanxiao (Tangyuan) or Lantern Festival. Tangyuan was named as Yuanxiao (袁 曉 according to legend, this name was changed, because it sounded like that „remove Yuan“) and the 15th day of the first month in the Chinese calendar was considered to be Yuanxiao Festival.

Also, Chinese serve them as a dessert on wedding days, Dōng zhi – Winter Solstice Festival (冬 至 dong means „winter“ and zhi- „arrival“) and just for family gatherings. Tang yuan is a symbol of the family togetherness, because of round shape of the balls and the bowls where they are served.

To sum up, you can also buy this product in supermarkets in the frozen section, but it is very easy to make. It would be more delicious if you make them by yourself.